``I just spent years of hiding that accursed hunters, now let them hide of us!``

Cindy (Cynthia ``Cindy`` Jentra Britland) is the daughter and the first child of the jentra family (the last is FlapJack but he is renegade).She remaked herself in the family by having much qualities of Her father. 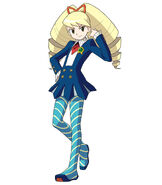 Her original design, from games to anime.
Add a photo to this gallery
Retrieved from "https://megamanfanon.fandom.com/wiki/Cindy?oldid=9740"
Community content is available under CC-BY-SA unless otherwise noted.