Elec Man is the one of the Dr. Light's robots from the first Mega Man game.

Elec Man was a hero for the Lightbots, killing himself when the generator of the city was going to explode, he flew into it and absorbed the energy, and throwing it back into the machine, overloading it and preventing the explosion somehow, killing himself in the meantime. In the Power Fighters series, he was a playable character in Gattsu's Revenge, 0025, and Charge.

He was a villian in the first game (and in ero), but reconverted back into an ally, but sacrificed himself in someone elses fan work. In my fanwork, he lives the rest of his life in Japan. In Gattsu's Revenge, Elec Man (known as Denki in the Power Fighters series), he aids Mega Man (Mega) in fending off an angry Guts Man (Gattsu) that has an army of his own. In 0025 (Bright Man/Akane's game), Elec Man fights alongside Bright Man's (Akane's) side and travels with him on his journey to defeat Choukyosei. In Charge, Elec Man's very own game, he is the main character and the first player already unlocked.

In the first Mega Man game, his strategy was to jump around and shoot lightning (not exactly my kind of strategy). In the other games I made up, his strategy is whatever the player chooses.

"Does this remind you of anything?"
―Elec Man, Addie's Ultimate Paradise

Elec Man appears in every episode of Addie's Ultimate Paradise as the one of Addie's main partners along with Cut Man, Fire Man and Ice Man. Elec Man is a laid-back, cool robot who is obsessed with Eurobeat music and hates water.

The Many Adventures of Karyll Aguilar

Elec Man appears in The Many Adventures of Karyll Aguilar, as Chase's Robot Master Partner along with Bomb Man.

Elec Man appears in Shining Bonds a la Mode, Elec Man along with the other Robot Masters visiting to Hoenn region, Later he gaves the HarmonNecklace for Karyll. 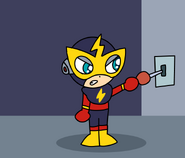 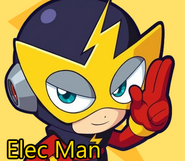 Elec Man's Portrait
Add a photo to this gallery

Retrieved from "https://megamanfanon.fandom.com/wiki/Elec_Man?oldid=30096"
Community content is available under CC-BY-SA unless otherwise noted.