Start a Wiki
Guts Man is a smart robot created by Dr. Light to construct buildings, so Bomb Man can demolish them. He and other robots where stolen and reprogrammed by Dr. Wily to work for him in Mega Man, but Mega Man defeated him and he returned to normal after being repaired by Dr. Light. However, after Wily's modification, Guts Man now is all brawl and no brain. Guts Man loves karaoke and wants to be a famous singer, but his singing voice is so awful Dr. Wily used a record of it to create Shade Man's Noise Crush.

Seeing he was the strongest of the robots he stole, and Mega Man had some trouble with Guts Man's "back" when he felt over him, Wily decided to mass-produce Guts Man, but the copies where destroyed by Mega Man before their activation. Wily collected the remains of the copies to create a large-sized Guts Man, but was only able to build half and replaced the legs by tank threads, naming him either Guts Tank or Guts-Dozer (Wily calls him by both names, and hasn't decided which one is better) and placing it on guard in his castle in Mega Man 2. Wily also uses Guts Man in Mega Man: The Power Battle and Mega Man 2: The Power Fighters, and in Mega Man 7 he got a replica from a museum and modified it into Guts Man G.

In Super Adventure Rockman, Proto Man defeated Bubble Man or Heat Man (depending of the player's choices), and Guts Man takes the weapon of the defeated robot to use. After some tries, he notices he can't copy weapons and gives it to Mega Man, saying he defeated the robot in a mighty fight.

In Mega Man: Battle & Chase, Guts Man enter the competition to buy root beer Energy Tanks. If the player win the competition with him, he will buy several of them and sing to commemorate, but people throw objects on him because of his bad voice and he falls over the beer Tanks, destroying all of them with his back.

Guts Man's powerful smash technique gives fear to Mega Man, and other robots try to imitate this technique, some of them being Stone Man and Concrete Man, but for unknown reasons, it's more effective when used by Guts Man. The technique is used even in the future by other robots like Flame Mammoth and Gravity Antonion. 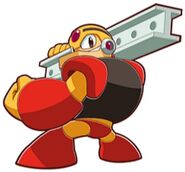 In the Power Fighters series, his name is Gattsu and he looks more like this.
Add a photo to this gallery
Retrieved from "https://megamanfanon.fandom.com/wiki/Guts_Man?oldid=24037"
Community content is available under CC-BY-SA unless otherwise noted.