The She-Devil is end result of an attempt to create a stronger, faster, and more intelligent version of the Rainbow Devil Mechaniloid products created during the Elf Wars. She had once fought against Zero but unsurprisingly was defeated, despite putting up a rather difficult fight that strained Zero's maneuvering skills. Though she survived the encounter, she was left in a comatose state until Rhapsody found her and reactivated her. However, she was quite different from before, without any recollection of what happened prior. Initially a mindless machine relentlessly attacking enemies without discrimination, one too many hits to the crystal by the Z-Saber has turned her character from a cold-blooded killing machine to something a little more friendlier.

Kamorphia appears as a semi-humanoid Reploid with varying shades of purple and black as her color scheme. Her Vices are a deep violet with her 'body' being a black-ish tone with a purple-bluish hue. Her head tends to stand out the most. Two stripes run down from her eyes to her cheeks to form a muzzle of sorts. Two more above the eyes converge at an upside-down diamond at the top of her head, situated in bright gooey hair formed in a spiky formation. Her eyes are of a dark purple color with her pupils being yellow with slits similar to a cat. A pair of long, pointed violet spikes jut out just from behind her 'hair', resembling receivers of some sort.

Like her predecessors before her, the She-Devil's body was amorphous and generally invulnerable against most physical attacks, but she was a lot quicker due to her smaller frame and because of her advanced AI, she made better use of her liquid composition. In battle form, a quartet of four large saber-like globs called Vices not unlike Albert's Bits as Mega Man Model W sprout from behind her. She can form these Vices into whatever weapon she fancies. The substances of these weapons are unknown as they can produce their own energy source, which she can use to form energy blades or buster weapons. This gives her incredible versatility to engage in both long-range and close-range combat. Not only are her Vices are amorphous, but as is her own body as well. This comes in handy when it comes to auxiliary offensive methods like forming a blade from her arm. This also gives Kamorphia sufficient infiltration capabilities, passing through security devices and measures by using a lower energy output and sneaking through small spaces as a dark, animate liquid. 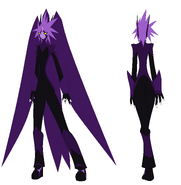 Frontal/rear view
Add a photo to this gallery
Retrieved from "https://megamanfanon.fandom.com/wiki/Kamorphia?oldid=4941"
Community content is available under CC-BY-SA unless otherwise noted.