NOTICE: Pardon our dust, page is under heavy updates.

Mega Man: Robot Revolt is a fangame concept being thought-up by Apihedron and is probably going to be made.

It is a normal day; the world has been peaceful for several years, with Dr. Wily seemingly vanished. Mega Man is enjoying this wave of relaxation when Dr. Light appears with worrysome news...

The television broacast has been hijacked by five unknown robots, who claim that they will be "bringing justice to mankind for their enslavement of robots". Afterwards, an attack on a robot factory strikes the city! Mega Man sets off to investigate and discovers their leader, Alto, who reveals his plan to enslave man as punishment for "taking advantage of machines".

Mega Man returns to the lab to discover that 8 robots are wreaking havoc across the world!

Will our heroes be able to stop these mysterious robotic rebels? 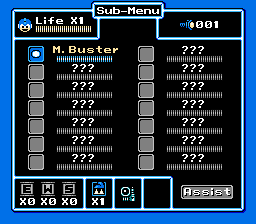 Sub-Menu Mock-up
Add a photo to this gallery
Retrieved from "https://megamanfanon.fandom.com/wiki/Mega_Man:_Robot_Revolt?oldid=16327"
Community content is available under CC-BY-SA unless otherwise noted.