Mega Man EN (Rockman EN: ロックマンキラーの復讐! Revenge of the Rockman Killers!) is a fangame developed by FangWolf.EXE, known as ZarelTheWindDragon or Lucian Summers/Lucian the Lugia on other sites. No programming details have been announced yet, but graphics exist on ZarelTheWindDragon's FurAffinity account. As of now this game plays out like Mega Man 2, lacking sliding and charging capabilities to emulate the classic feel, but the creator has been thinking of adding in the slide feature. The release date for this game is unknown and cannot be confirmed, and the last update was in 2010, but it may be released in the future.

Mega Man EN will also reintroduce enemies from previous Mega Man games, apart from the traditional Mets and Sniper Joes. Robot Guards from Mega Man 5 will appear in Launch Man's stage. There will be two T. Khamens located in Wolf Man's stage, each guarding a cave door in his stage (the second being the final room). Gilliam Knights will also appear in Wolf Man's stage, but in wolf form only. (They are known as Gilliam Wolves ingame) Several other Mega Man V enemies will appear, such as Cannon Roaders and Swim Balls. Metall Snipers will appear in Vulcan Man's stage, and new types of Mets though not announced yet, are possible. Some Mega Man 9 enemies appear as well, including Classical Cannons, and purple Diarns which will appear in Quartz Man's level.

The music is being made by a YouTube user named Kevvviiinnn.

There is no exact, out-of-game story, but the plot is confirmed. In 20XX, an attack lead by Enker and the other Rockman Killers occurs. Enker states he has taken Wily hostage and will call off the attack if Dr. Light surrenders his inventions to Enker to do with whatever he pleases. However, Dr. Light and Mega Man refuse to give up and Mega Man goes after Enker to save Dr. Wily and the world.

These Robot Masters follow the Rockman Killer Number series, but they skip RKN-004, possibly because Quint is technically not a Rockman Killer model, but part of the group. 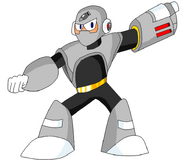 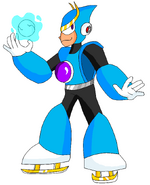 Wolf Man
Add a photo to this gallery
Retrieved from "https://megamanfanon.fandom.com/wiki/Mega_Man_EN?oldid=23513"
Community content is available under CC-BY-SA unless otherwise noted.