"After a freak accident Dr. Light and Mega Man find themselves digitized, separated from Dr. Cossack, and trapped in a prototype battle simulator! The two heroes are forced to fight for their lives as they search for their friend and a way back to the real world! Challenge powered-up copies of past robots to battle and download their data to become stronger and escape from the system!"
―RPG Prototype Synopsis

Mega Man RPG Prototype is an ongoing fangame project with a goal of creating a progress-saving, no-download, no-install, cross-platform, browser-based Mega Man RPG. The player fights his way through different robots in a turn-based battle system reminiscent of both play-by-post forum games and early 8-bit role-playing games. As a 'prototype', the project is under constant development and refinement, though it is entirely playable in its current iteration.

The year 20XX. It has been several years since the Roboenza outbreak, and no one has heard from Dr. Wily since. Dr. Light and Dr. Cossack, thinking about the past and looking toward the future, agreed to work on a massive robot database, which would compile all the robot data throughout the world into a single, detailed system so people could reference it in the future. Robots would be able to "upload" themselves into this database, and hone their skills against the data, which would lead robotkind to a stronger, smarter future.

After months of finding and compiling this data, Light and Cossack are prepared to unveil a prototype of the database to the public and demonstrate its features (even if the system still had some bugs). Little did they know that there were two surprises waiting for them there that night, the first of which was Dr. Wily hiding in the audience, watching the unveil. The second surprise would prove to be much more devastating. The public unveil seemed to be going fine at first, but in the middle of a test run, a pair of curious alien robots appeared!

The robots Light and Cossack had assembled there were helpless against them, and once defeated, they use an arcane power to digitize robots and humans all over the world into the Prototype! The robots proclaimed that humanity would have to fight one another to the top and defeat them in order to reclaim their freedom. And thus began a mad scramble for humanity to raise their own digital robot armies and lead them into combat against one another...

Each and every robot has their own specialized weaknesses and resistances, and must fight other Robot Masters and Support Mechas to earn their weapons and potentially unlock them for use in battle. While each robot has its own unique set of level-up abilities based on classic series weapons, abilities can also be manually equipped to compatible robots by the player so long as the ability matches that robot's Core Type - a mechanic similar to the element types in Pokémon. For example, an Explode type robot like Crash Man can learn Hyper Bomb by defeating Bomb Man and equipping his weapon. However, there are also dual type moves which are compatible with two different core types, like Ice Slasher being compatible with both Cutter and Freeze type robots.

Battles are carried out in a turn-based system very similar to the Pokémon games where robots fight one-on-one, but each side of the field can have up to seven additional robots on the bench for switching out to that can be targeted by ranged attacks and potentially disabled before they get a chance to attack. Each robot can have up to eight different abilities equipped and each ability has different elemental properties, effects, and weapon energy requirements. Once a target robot's Life Energy has been reduced to zero, it will be disabled and may drop an item like an Energy Pellet, Weapon Capsule, etc. in the process. These items can be used once per turn, and switching does not give the enemy a free attack which encourages experimentation.

A new post-game mechanic named Star Force (not entirely related to Mega Man Star Force) adds 'stars' to the Robot Master and Fusion stages. Stages can also be combined to make new fusion stars. For example, Cut Man's stage and Toad Man's stage can be combined to form either an Abandoned Sewer Star or a Rainy Warehouse Star, which accounts for a different star. Though it is entirely a post-game item, collecting these stars massively magnifies the strength of any Robot Master sharing that typing. Various other post-game material, such as 'Challenge' missions and a traditional Endless Attack mode, also offer multiple extra advantages to be earned.

The game is integrated with a companion website that hosts a full leaderboard ranking players by their Battle Point total as well as a Pokédex-like database of all the robots and abilities that appear in the game. The database features the sprites, stats, descriptions, dialogue, and mechanics of each and every single character. Players can also use their game accounts to participate in the community forums and to directly participate in the formation of new content, mechanics, and features. This "devroom" style of development was inspired by Mega Man Legends 3 and has been actively shaping the direction of the game since its inception in early 2011.

Robot editor. Here the player can trade robots and teach them moves

Selecting which mission to play

Dr. Light's robots face off against Guts Man in the Mountain Mines

Dr. Wily faces off against Metal Man in the Industrial Facility

Dr. Cossack's robots face off against Pharaoh Man in the Egyptian Excavation

Dr. Light's robots vs Spark Man and others 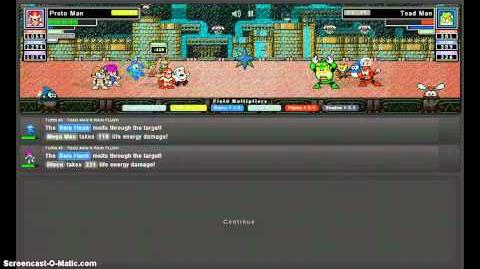 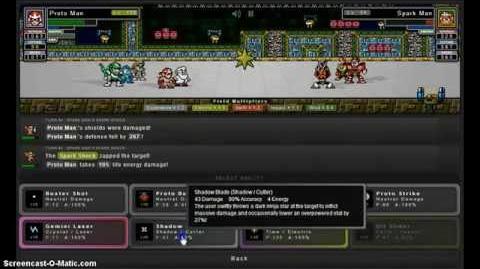