July 14, 2013 (Worldwide)
Mega Man Unlimited also known as (ロックマンアンリミテッド Rokkuman' anrimiteddo?) is an unofficial fan-made game created by MegaPhilX. It was released on July 14, 2013. According to the game's creator, it was originally meant to be a "hypothetical" sequel to Mega Man 9, created before the official Mega Man 10.

It started out as a simple Flash project, and eventually it was transferred into more complex software, programmed in C++. As with Mega Man 9, and Mega Man 10, it too uses an 8-bit art style that's meant to imitate the style of the NES games. Like the aforementioned games, it has multiple playable characters. Initially, the only playable character was Mega Man. He can use the slide, due to the game being partially based on Mega Man 3. A further update also reintroduced the Charge Shot as an optional ability.

With release of Version 1.3.0, a second playable character, Z-Prototype, was added, who can be unlocked for use the main story mode and learns new techniques from defeating bosses, but due to being an unrefined prototype, he exhausts life energy upon performing his attacks.

After its release, an update added an easy mode similar to the one present in Mega Man 10 due to complaints about the game's difficulty. Despite this, the game has received mostly favorable reviews.[1][2]

The game's storyline attempts to start bridging the gap between the classic Mega Man series and Mega Man X series timelines, inching away from the former and into the latter by dealing with robots turning evil due to exposure to a virus similar to the Maverick Virus, and revealing the byproduct of Doctor Wily's mysterious blueprints shown in Bass's ending of Mega Man 2: The Power Fighters. It also sees Bass, and by extension, Treble, completely defecting against Wily and go rogue. In the past, Bass had opposed him on several occasions, but hadn't outright severed his allegiance to him.

On top of having the standard eight Robot Masters which must be fought to move on to the final stages of the game, players can discover four hidden letters scattered throughout hidden areas in four different stages, which collectively spell out "YOKU". Obtaining them all will cause the middle icon of the stage select screen to alternate between either Mega Man's face or the Wily Fortress stage select if all eight ordinary Robot Master stages have been cleared, and that of a new and mysterious ninth Robot Master, Yoku Man. His icon will appear to the sound that Appearing Blocks make (referring to Yoku Man's powers), and if his icon is chosen while visible, it will take the player to a secret and substantially harder bonus stage where he can be found and battled to obtain his Special Weapon. Yoku Man is later fought regardless of being unlocked or not in the endgame.

On August 1, 2014, an update was released, which includes a new stage with a tenth Robot Master called Whirlpool Man, where said Robot Master can be found and defeated to obtain a new Special Weapon, along with two new modes: Endless Attack and Endless Boss Attack.

On May 23, 2015, another update was released featuring the unlockable character of the Z-Prototype playable after beating the game in any modes. [3]

The story, as shown in-game:

"In the year 20XX AD... Mega Man has managed to preserve world peace by defeating the evil Dr. Wily once more... But only a few months after Mega Man's last victory over the evil scientist, 8 robots claiming to be working for Dr. Wily started a revolt, plunging the world into chaos once again. However...

"I swear, Dr. Light!" cried Dr. Wily. "I didn't want this to happen! I don't know WHAT caused my robots to go berserk! Let's work together to fix this horrible mistake!"

It seemed that Dr. Wily was sincere for once. So both he and Dr. Light got to work right away...

"It looks like some other force is controlling your robots, Dr. Wily," Dr. Light said, "but I have no idea WHAT IT IS..."

However, before they could do anything else, a charged shot is fired out of nowhere and blasts Mega Man. Shortly afterward, a mysterious robot zooms pass them, grabs Dr. Wily, and then warps away.

"Mega Man! Go after Wily's kidnapper!" said Dr. Light. "It may be the key to this mystery!"

"You are next, Mega Man... Ha ha ha ha!" laughed the mysterious robot.

Mega Man then wasted no time and arrived on the scene to stop the Robot Masters, uncover the mystery, and rescue Dr. Wily.

Why is Mega Man not affected by the Mysterious Virus?

Upon defeating half of the Robot Masters, they analyzed the remains and discovered that a virus was responsible for their actions, with Light warning Mega Man to be careful of getting close to the Robot Masters, as being directly near them risked the spread of infection. Shortly after Mega Man left, however, Light was surprised that Mega Man was not registering any signs of infection of the virus at all despite having fought four of them.

Upon defeating the remaining four Robot Masters, Mega Man fought Yoku Man, the one responsible of controlling Appearing Blocks, and after a difficult battle, Yoku Man is defeated.

After defeating the remaining five Robot Masters, including Yoku Man, Proto Man contacted Dr. Light and Mega Man and reported the location where Dr. Wily was apparently taken to, but is then ambushed by someone (apparently someone Proto Man knew, based on his reaction), with Mega Man heading to the castle to aid Proto Man.

Mega Man, upon exploring the castle, then found Bass and Protoman, with the former informing Mega Man that the latter was getting sloppy. When Mega Man tried to help Proto Man, he tells Mega Man to stay away from him, making it clear that Proto Man is not in control of himself due to being infected with the virus. Mega Man narrowly managed to do enough damage to Proto Man for him to regain his senses, with Proto Man apologizing to Mega Man, viewing himself as weaker than he initially thought.

Eventually, after Mega Man went deep into Wily's captured castle, he discovered the identity of Wily's kidnapper: Bass. Bass also claimed he instigated the attacks to prove robots' superiority and tells Mega Man to "wake up" before fighting him. Ultimately, Bass ended up defeated, with him expressing a headache (implying he too was affected by the virus) and expressing confusion as to why he can't beat Mega Man. Suddenly, Wily appears in his machine and knocks Bass out, scolding the latter for his insolence against him.

Wily then admitted that, while he hadn't planned on Bass abducting him or his own robots running amok, he was indeed responsible for the virus running amok among his own robots, though he commented that Mega Man was unaffected by the virus, causing him to decide to refine it. Wily then fought him in his Wily Machine, including a mechanized walker. However, he ended up defeated, although it caused the floor to collapse under Mega Man as his saucer made its escape. Mega Man then went through parts of the remains of the castle, and encountered a mysterious prototype robot.

The prototype proved to be more than a match for Mega Man, as it's immune not only to the Mega Buster, including all the special weapons that Mega Man has obtained, but it even managed to rip off his Buster arm, nearly killing him in the process. However, the prototype collapsed due to its incomplete state. Wily then retrieved the robot, and presumably set the castle to self-destruct. Mega Man then proceeded to push himself with all his strength to make it outside the castle, although he eventually collapsed from exhaustion just outside the castle when it blew up. Proto Man wonders whether Mega Man escaped, as well as whether he'll be on his own as he realized he himself was weak due to the virus.

Bass: An enemy, or a friend?

Meanwhile, Mega Man was being repaired, with Bass being revealed to have been responsible for saving Mega Man, due to wanting revenge against Wily for removing him of his purpose of defeating Mega Man (referring to the prototype). Dr. Light then explained that an unidentified individual (Bass) had brought Mega Man back to Light's Lab.

Dr. Wily disappeared along with his virus, with the status of the prototype robot being unknown, although Mega Man, unlike prior times, was certain that there would be another fight.

During the End Credits, it shows that all the Robot Masters, free from the Virus's influence, are now having a new life together, and having quit from working with Dr.Wily, they all got new jobs, and now they are happily living with Humans in peace and harmony.

A New Threat, a New Hope

Sometime later, Dr. Light is unseen buiding something, which later gets surprised when his new creation seems to have endless potential... 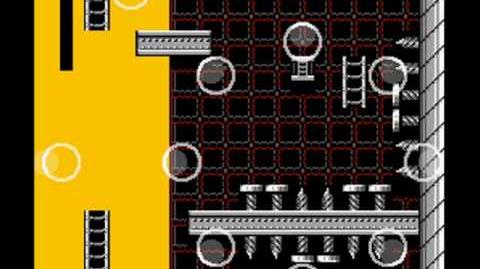 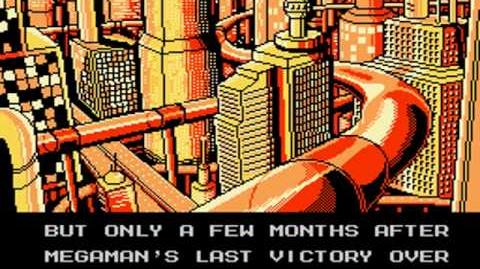 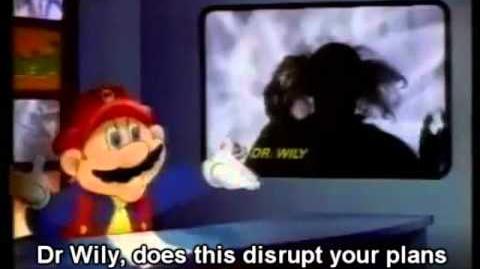 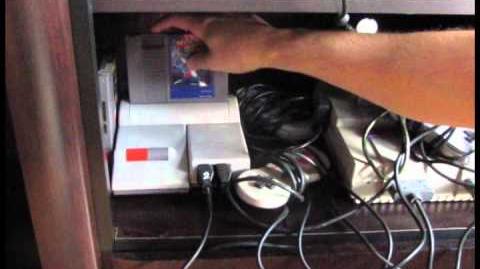 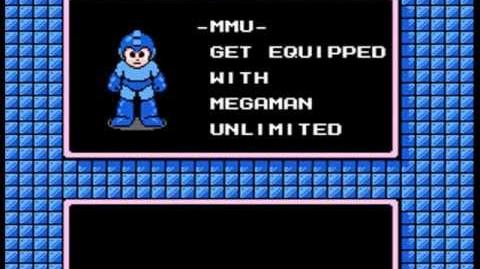 Megaman Unlimited Trailer - Message from Dr Light!
Fourth trailer. At the same time, announcing the release date of the game. 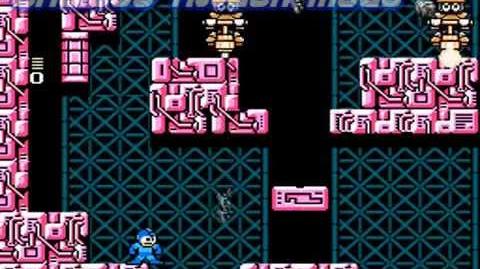 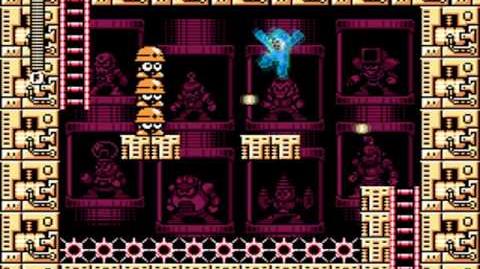 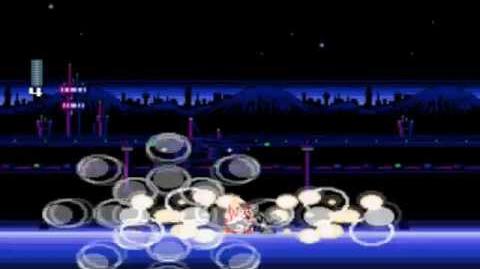