Mega Pony is a Mega Man themed fan made game with My Little Pony characters.

The story is set after the defeat of Discord, who returns as the main villain. Discord manages to break out of his stone prison, and he captures and hypnotizes the ponies that hold the Elements of Harmony, which are the only artifacts capable of defeating him, and uses them to spread chaos across Equestria. In a desperate attempt to save the land, Princess Celestia builds a powerful fighting robot to regain the elements and put an end to Discord's wily schemes. The robot, of course, is Mega Pony, the playable character in the game, which as the name implies, is a pony version of Mega Man. 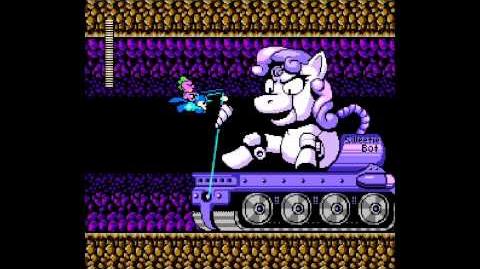 Retrieved from "https://megamanfanon.fandom.com/wiki/Mega_Pony?oldid=18726"
Community content is available under CC-BY-SA unless otherwise noted.