Start a Wiki
Pharaoh Man is a Robot Master created by Dr. Cossack with ancient Egyptian artefacts he found in a excavation, including parts of a sarcophagus and mummies. Unknown to him, one of the objects has mystical powers, and other is cursed, and as result Pharaoh Man was possessed by two souls, activating before being programmed. He is a advanced combat machine with millennia of knowledge and skill, making of him a dangerous foe for Mega Man.

One of the souls is a good warrior that agrees to work for Cossack. He is a skilled athlete good with armed and hand-to-hand combat, and is a bit shy. The other soul is of an evil pharaoh with a cursed eye that wants to rule the world, starting by Egypt. He can summon dead bodies of his kind, (in his actual case, inactive robots) and inflate his cursed eye to harden it to use as a shield strong enough to resist acid, but he suffers when the cursed eye of darkness is exposed to strong light, to the point he can faint with a flashes.

Both souls are good with mystic fire-based attacks. The good soul mainly uses fireballs, which he can charge to create giant fire spheres, being able to create sun-like spheres four times bigger than his size to crush his enemies with the accumulated energy. The evil soul has a preference for energy waves.

In recent times, the evil soul used a Copy Robot to try separating the souls from the body, wanting to keep the original while the other stayed in the cheap copy, but it went wrong and the evil soul stayed in the copy while the good stayed in the original. The good soul now has all of the evil's powers and weaknesses, including the mystic powers and the curse. The evil soul lost most of his mystic powers, now being only able to use fireballs and small waves, but he is now free of the curse and modified his body to increase his powers at the cost of lowering his defense. Although they don't like each other and often argue, they agreed to work together for at least two centuries, one working for Cossack and the other for Wily. 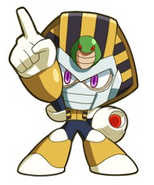 Pharaoh Man in Mega Man: Powered Up style
Add a photo to this gallery 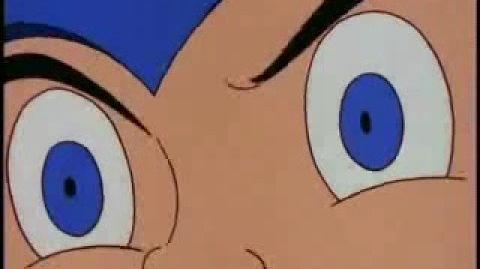 NOW I'VE GOT YOUR POWER
Add a photo to this gallery
Retrieved from "https://megamanfanon.fandom.com/wiki/Pharaoh_Man?oldid=23948"
Community content is available under CC-BY-SA unless otherwise noted.