„But Lord C, They just belong to us.If we simply destroy or auto-destroy them the Regal forces will be downed in the member number...I better take it on my way.I just know I say this too much times but this time...Nothing will stop me this time!„ 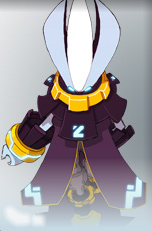 In Collision Chaos, he formed a new Head giga team from old robots and believed that he can live in that ruins.He discovered some important plants and returned to Lord C giving to him that plants.Lord C creally dont liked that new team and gived a impossible mission to them.That new team died and Ix was very undecided what to make.He discovered new humans and friends making the team of Lord C bigger.

Retrieved from "https://megamanfanon.fandom.com/wiki/Pir%60Oth_Ix?oldid=9302"
Community content is available under CC-BY-SA unless otherwise noted.