Reploid, or Repliroid (レプリロイド Repuriroido?, a combination of the words replica and android) in the Japanese games, from Mega Man X is an android with complete free will and thought processes comparable to that of humans.

Reploids can be thought of as the next evolutionary step of the robots from the classic series. For all intents and purposes, Reploids are the same as human s on a mental level; they think and feel, giving them the ability to make their own decisions and develop unique personalities. Although Reploids undergo major physical changes throughout the series, they generally retain this one trait throughout their lives.

Since Reploids posses absolute free will to the same extent as human beings have, they can exist as civilians as well. This however has led to some Reploids becoming criminals or rebels, which leads to the classification of "Mavericks " ("Irregulars" in the Japanese versions).

Reploids are humanoids, and may appear either male or female. They usually have a human face (and sometimes, hair), as well as bulging armor around the forelimbs and upper body. However, many are built to actually resemble robotic animals with humanoid traits. These particular Reploids tend to be designed for very specific tasks; for example, a heavy duty Reploid may be large and bulky, whereas a marine Reploid may be based on a fish. There is no limit to the tasks Reploids can perform with the right design.

It is eventually revealed in the series that Reploids have a form of DNA; Iris even mentions that a Reploid's DNA is similar to a human's soul, calling it a DNA Soul. However, DNA was shown to integrate the actual body as well when Gate used a piece of Zero to carry out his plans. DNA can be manipulated for several purposes, such as Reploid resurrection (said to be illegal in Mega Man X6) and even cloning.

As machines, Reploids do not age, although they still require rest and maintenance to remain functional. The Maverick Hunters  have capsules which X and Zero used to recover, although cybernetic beds were also used by Reploids in Giga City.

Although Reploids are never explicitly shown consuming food or beverages in-game, the series states that they use Energy Crystals to maintain themselves. In other media, Vile stated in the Rockman X manga that Reploids lack taste, being unable to tell if they were drinking a glass of bourbon or mud. It is later contradicted in the beginning of the Rockman X4 manga, which portrays Reploids, X and Zero included, casually enjoying drinks. This later culminates in X vomiting from trying Dr. Cain 's specially mixed oil drink, with X declaring it tasted disgusting. However, as X has human-like qualities that other Reploids lack, such as being able to cry, he may have taste as well. In the Rockman Zero manga, Zero is shown to have taste, but is unable to consume human food, finding it disgusting and requiring Energy Crystals instead. Years later, the new Zero consumes several cola bottles, but he temporarily goes out of control.

In 21XX, some 100 years after the events of the original Mega Man series and the apparent death of Doctor Thomas Light , an archaeologist named Doctor Cain excavated one of Doctor Light's laboratories and discovered a capsule which contained the highly advanced robot named "X". X represented a substantial jump in robotics technology, prompting Cain to reproduce X's technology from Light's original work and notes. Being unable to reproduce the technology perfectly, Cain was forced to invent alternative solutions. All robotic designs based on X's technology have been referred to as "Reploids," since they are imperfect "replicas" of the original X. Despite being the original, X is often referred to as a Reploid, and refers to himself as such.

From then on, Reploids were mass-produced to live among humans on Earth. However, some Reploids started to rebel against their creators, and would harm those they did not agree with. These reploids were labeled as Mavericks. A council decided to create a group of reploids that would rise to the occasion of Maverick outbreaks. This group was dubbed the Maverick Hunters.

However, a few of these Maverick Hunters would also break away from their original programming and cause, after the climax of Sigma 's first encounter with a rogue Zero. From then on, a mysterious virus (that would be later be known as the infamous Sigma Virus ) would infect this Reploid, who would cause mass destruction and trigger the Maverick Wars; for decades, the conflict divided the Reploids between those who fought for the humans and those who opposed them; either because of viral infection, rejection of their status as tools of the humans or other reasons.

First appearing in Mega Man X8, the New Generation Reploids were created from the prototype Axl . Their main purpose is to serve as workers for a space elevator project, known as "Jakob ". These Reploids are fitted with a chip that grants immunity from all viruses known at the time, and also permits these Reploids to change the shape of their bodies (like Axl). Also, Axl and the New Generation Reploids can copy the form of other Reploids by adding their DNA to their Copy Chips. However, this ends in failure, as the advanced chip also incorporates data from the Maverick Sigma, causing the Reploids to go Maverick at will. 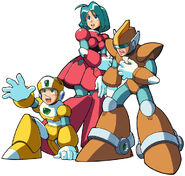 Reploid and Mechaniloid denizens of Giga City in Command Mission

Maverick Hunter Reploids from The Day of Sigma

Reploids from Gamma's Unit in X4

Retrieved from "https://megamanfanon.fandom.com/wiki/Reploid?oldid=15843"
Community content is available under CC-BY-SA unless otherwise noted.