Roll (ロール, Rōru?) is a kind-hearted humanoid robot created by Dr. Light to be a housekeeper, helping around Dr. Light's Laboratory by cleaning and cooking. Roll is like a younger sister to Mega Man.[1][2][3] Her dream is to one day open a hospital to help people in need.[4][5]

Roll is one of the few female characters in the original Mega Man series, and the only female humanoid robot until Plum and Splash Woman were introduced into the series. In spite of her minor roles in the games, she is perhaps one of the most special and well-known characters in the entire Mega Man series, and remains a fan-favorite to many. She is especially well known as the first female character ever in the Mega Man universe. She is also special in a sense that she, with her counterparts Roll.EXE and Roll Caskett and appearances in other media, combined, has made the most appearances of any supporting character in the Mega Man series as a whole.

Roll mostly looks quite the same in most games she appears in. Roll has a fair skin complexion and blue or green eyes. Unlike Mega Man, she does not have visible joints. She also has long blonde hair with fringed bangs, tied back in a ponytail with a green ribbon, though she didn't originally have the bow. She mostly wears a red dress and red shoes.

Roll is shown to be sweet, kind, and optimistic. She is a caring individual with a big heart. She doesn't fight Robot Masters as much as her brothers, but she does if she has the chance. She is supportive and compassionate, especially to Mega Man, Proto Man, and Dr. Light.

Roll appears as the only unique unlockable character in the game in that she is not a palette swap. She is considered to be a "joke character", as she has the same attacks as Mega Man but weaker and with a longer startup time as she has to summon whatever weapon she uses to attack. On the plus side, Roll has the smallest sprite in the game, making her somewhat hard to hit, and allows her to avoid some attacks from tall characters by simply crouching. She also appeared in its sequel, Marvel vs. Capcom 2: New Age of Heroes. Due to her dress, she can hover, having a great chance of dodging attacks that are a little too high. Also, due to her short legs, she is one of the slowest characters and can dodge high and some medium attacks.

In her ending Roll gains an upgrade from Dr. Light as she defeated the boss before Mega Man, becoming Hyper Roll and going after Dr. Wily. Mega Man appears too late and sheds a tear for missing the upgrade. Roll also appears in one of Mega Man's victory poses, carrying a bouquet of flowers for him.

Roll appears as a playable character in both versions of Tatsunoko vs. Capcom: Cross Generation of Heroes and Ultimate All-Stars. She attacks with a broom and bucket, using said broomstick like a pole weapon (i.e., a Bō staff). Unlike Marvel vs. Capcom, Roll has a new and more evenly balanced gameplay move list (instead of copying Mega Man's move list like in Marvel vs. Capcom), an excellent character assist, very unique and helpful Super Moves (including one where she recovers health) and above-decent fighting capabilities. Because of this, Roll's status as a fighter has been upgraded compared to her initial fighting appearances in the Marvel vs. Capcom series. She appears in three endings:

In addition, although she is technically a "Robot Master", Zero refers to her as a Reploid in Ultimate All-Stars.

Roll appears as a collectable card in the free DLC Mode, Heroes and Heralds, alongside Mega Man, X, Dr. Wily, and Vile. Her primary and secondary abilities are granting the user the ability to automatically fill up the Hyper Combo Gauge by simply crouching. She also appears in Nova's ending as a member of the new Nova Corps, alongside other Mega Man characters.

Roll appears in Street Fighter X Tekken. Her appearance is altered to match that of Bad Box Art Mega Man's, and as such, is often nicknamed Bad Box Art Roll. She also shares some of Roll Caskett's personality traits.

Super Smash Bros. for Wii U

Roll appears as a trophy exclusively for the Wii U version of the fourth Super Smash Bros. game. Her description says: "A household robot that Mega Man thinks of as a sister. This trophy is based on the original Roll from Mega Man games 1 to 7. Her appearance and backstory may differ somewhat between titles, but she always has long, blonde hair, a red outfit and a kind, reliable personality. In some games, you can even play as her!"

Roll appears as an Ace Support Spirit in Super Smash Bros Ultimate. When equipped, she grants the Autoheal effect, healing the user a bit every five seconds.

Roll's Spirit battle is against the female Villager with pink hair and Mega Man. The player has a time limit to defeat the Villager, and like Roll's Spirit, she heals over time. Defeating Mega Man is optional.

Roll is an A rank Hunter Program. Her skills are Roll Swing and Supporting Eddie.

Roll has a S rank variation named Swimsuit Roll. Her skills are Swim Ring Hurl and Water Shield. This version has an alternate color available as a skin.

"MegaMan's gonna need my help whether he likes it or not."
―Roll, The Beginning

Roll is one of the main characters in Ruby-Spears's Mega Man animated series, appearing in all episodes. She was created as a teenager in the cartoon, and her arm can transform into several home appliances, which she can use for combat. According to the first episode, she apparently adapted these attachments as weaponry herself, whilst Doctor Light was modifying Rock into Mega Man. Although usually below par in combat compared to Wily's robots, she would often fight alongside Mega Man, often defeating Robot Masters on her own. She is voiced by Robyn Ross, except for a single episode, in which she is voiced by Kathleen Barr (note that there is much debate over how many episodes Ross voiced Roll in, with some sources saying Ross and Barr alternated the role in the first season before Ross became Roll's full-time voice in the second season).

Mega Man: Upon a Star

In the OVA Mega Man: Upon a Star, Roll tries to stop Dr. Wily from stealing Dr. Light's time machine in episode 2, and is taken hostage. She is later rescued by Mega Man. In episode 3, Roll tries to help Mega Man in the battle against Dr. Wily.

In the cartoon Captain N: The Game Master, there is a character called Mega Girl that is believed to be the series' version of Roll. Her appearance is similar to Mega Man, except that she has long hair and her armor has different colors.

Roll is a recurring character in the manga. She is shown to be obsessed with cleaning, even to the point where she kicks Dr. Light out of his own office just to clean it. This version of Roll is shown to be highly matronly towards her family both human and robot, and is very no-nonsense even towards her enemies, including Dr Wily.

When Dr. Cossack was kidnapped by Skull Man and Roll heard from Ring Man that Dr. Cossack's Citadel was attacked, she went with Mega Man to the citadel to see if Kalinka was alright. Roll and Kalinka are later kidnapped by Skull Man and taken to a cave in a snowfield. After some time a snowstorm starts and Kalinka gradually gets cold, and Roll overheats herself to keep Kalinka warm. When Skull Man is defeated, he reveals where he hid Roll and Kalinka, and they are rescued. This results in the two becoming best friends, to the point of partnering up to enter the Race across the World Bridge.

The manga starts with Roll, Mega Man and Dr. Light having fun with friends, but as trouble appears, Roll takes Mega Man to a mysterious island to investigate. Later Roll buys a box of chocolates as a valentine gift for Mega Man and acts like a school girl in a crush (blushing, super happy and getting ashamed). Grenade Man appears and starts to destroy the chocolate stores, and later a chocolate factory. Roll tries to stop him, but he smashes her gift and Mega Man appears in time to rescue her. Roll protects her present inside her body, using her core to warm it; at the end the gift takes the form of her heart-shaped core, with "2-R LOVE" (R-2 3.Y0J backwards) written on it. Roll gets happy and gives the present to Mega Man.

Roll appears in the manga, passing most of the time in Dr. Light's laboratory.

In the short story Rockman Burning Shot, Roll is captured by Dr. Wily to lure Mega Man to a trap. Mega Man saves Roll from Wily and his robots but Roll still has an explosive attached to her, Bass appears and challenges Megaman, Mega Man tries to convince Bass that he doesn't want to fight and just wants to save Roll, but Bass priority is to defeat Mega Man. They fight, Mega Man wins, and due to Bass' pride he helps Mega Man save Roll from the explosive.

In Onore Rockman, Enker disguises as Roll to trick Mega Man, but it doesn't work well. In the end Mega Man makes a compliment for the real Roll, who blushes and smiles happily while grabbing her cheeks with both her hands, then the couple grab each other's hand jumping happily while a sun shaped as a heart starts to descend.

Mega Man Through the Ages

Roll, alongside Dr. Light, Beat, and Rush, appear at the 1987 banner at the beginning to bid Mega Man good luck as he travels through the area collecting 30th Icons. 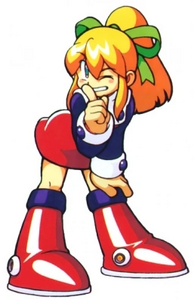 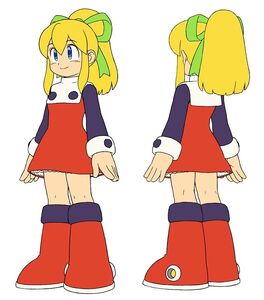 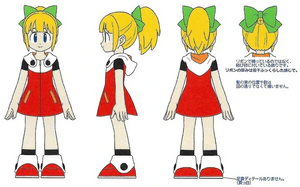 This is a mugen character that has been arranged by adding weapons that could not be used in the Marvel vs. Capcom series.

One day, a letter arrived under the Roll of Household Use Robot, which was manufactured by Dr. Light.

How! The Letter was a reminder to join the Fighting Tournament. "We have a Mugen Fighting Tournament to determine the strongest of the In the World Fighters. You have been selected as the Member. Give you a Participation Right. At the same time, give Abstention Right. There is no use for those who escape. Tournament is performed only by those who are really strong! I look forward to your Courage and Fighting Spirit. Kung-Fu Man"

Community content is available under CC-BY-SA unless otherwise noted.