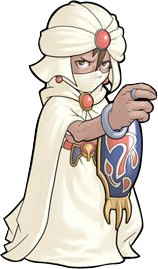 Returning soon to finish what I have started. After that, I'll leave, probably for good.

Long story short, look at these pages if you want to know more:

This is my account in the Final Fantasy Wiki. Look up "Pikmin Master" on Google and this page is your best result.

And this is me in the EarthBound Wiki. You'd be better off if you saw my FFWiki page.

I'm making pages on these guys.

Since there is a lack of fan work on Robot Masters on this Fanon Mega Man Wiki, I'll probably take over as the main Robot Master idea maker.

If anyone in charge of this Wiki is reading this, do you mind if I make each of these Robot Master ideas in their own pages. I know they're simply fan ideas for a non-existant game, but I've seen others do that with games that don't exist.

The order is: Stun Woman, Surf Man, Hot Woman, Glacier Man; Guard Man, Virus Man, Awesome Man, Flat Man. The order is not a full circle and Flat Man can only be faught after the others are defeated. Awesome Man and Virus Man are both somewhat weak to Stunning Heart and Guard Man is a predictable boss, although having no weaknesses other than Paper Cut.

This game uses the same RMs, but the RMs cannot be faught, so the levels can be completed in any order.

The list is complete. The order is: Empty Man, Thermo Man, Bounce Woman/Boom Man, Twist Man/Beam Man/Push Man, Liquid Man. The order is not set, as the weaknesses branch.

The weakness table is in the link to Century 2 above.

Coming soon. I will use some all of the below RM Dumps and more!

Twin Men: Two identical (except one is red and the other green) humanoid RMs who seem to share a mind. They attack in unison using their weapon Twin Wave (Red/Green). This attack resembles the Pharaoh Wave when used my Mega Man and co.

Lunar Man: A crescent-shaped RM supposedly based on the moon. He floats around and rolls for attacking. The weapon is Crescent Cutter (Purple/Yellow), in which some purple energy attacks from a short distance in the shape of a crescent.

Noise Man: A humanoid RM with built-in amplifiers specifically designed to be annoying, but prefers to generate good quality music. The weapon is Sound Shield (Orange). It is a basic shield weapon that surrounds the user with four yellow eighth notes.

Clay Man: A clay maker. Loves pottery. The weapon is Clay Bomb (Brown/Red), which can stick to an enemy and explodes. The user can set the clay off prematurely.

Wing Man: Mainly used to test whether or not humans can fly using robotic wings. Wing Man doesn't mind. The weapon is Metal Feather (Green/Silver), which is a Metal Blade wannabe, but it isn't the weakness of any boss.

Prank Man: Self-explanatory. The weapon is Fire Surprise (Purple/Blue), which is a luck-based fire weapon that varies in area-of-effect.

Steel Man: A cheap imitation of Metal Man. The weapon is Steel Saw (Silver), which functions like Dive Missile with the uberness of Metal Blade.

Celest Woman: Another space-themed RM. The weapon is Nova Star (Yellow/Cyan), which is the general enemy-clearing area-of-effect eapon.

Chem Man: Used in case humans just can't handle some chemical reactions. Chem Man is very durable and precise (But not as much as Century Man, of course). The weapon is Chemical Bomb (Violet/Green), which a beaker of unknown whatever is thrown Hyper Bomb style and explodes on contact.

Meteo Man: Used to destroy any incoming meteorites with his speed, power, and gravitational resistance. The weapon is Meteor Charge(Red/Orange). Remember Heat Man's physical attack? It functions like that.

Serve Man: Strike Man, but tennis-themed. The weapon is called Energy Return (Yellow), which is similar to Slash Claw, but slightly better ranged and can return incoming projectiles, even non-instant-kill beams.

Calc Man: Same as Chem Man, but with math. Whether or not I want a Sho Minamimoto reference to this is all up to me. The weapon is called Math Power (Blue), which functions differently depending on the position between the user and a target:

Apple Man: A Robot Master meant to be a gardener, but instead became a Gravity-themed RM. (Get it?) The weapon is Apple Shield (Red/Yellow), which is a traditional shield weapon.

Wash Man: Essentially a washing machine robot. The weapon is Wash Whirlpool (Blue/Black), which travels along the ground, but when the button is pressed again, the whirlpool rises to deal multiple damage with decent vertical range.

Viking Man: A Robot Master built in the image of a traditional Viking. The creator is of Nordic decent and wanted to show how Vikings really are back in the day. The weapon is Viking Axe, in which the user launches an axe, cleaving the enemy while rotating. However, the attack can fail if the wrong part of the axe hits the enemy. Always spins the same way, so the move is easy to use when in the correct possition and prediting the shot's destination.

I just realized that there are only three contributors to this wiki as of now: yours truly with my Century series, Ericard, who does the more serious stuff and Robotnik, who does everything else that I don't do. Pikmin Master 04:54, March 10, 2011 (UTC)