Yes, I made my first robot master set!! It is revealed now, great guesses Leajey and Awesome! 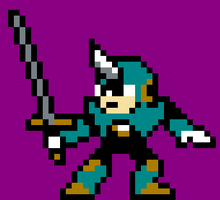 Pike Man is a proud robot which is always on the guard with his silver pike. To protect his weapon, he took over a fantasy castle and he now hides in the basement dungeon. Weapon: Pike Slash

While most robots rely on energy, Ember Man relys on sun power. Even though he lives in a factory, when he is out of power he just burns another coal chunk and takes the energy out of it. Weapon: Cinder Missile 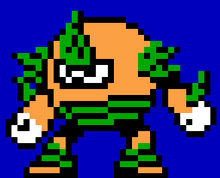 Camouflage is important for Citrus Man. He lives in a botanic garden, and he silently waits in the bushes. He built guardians to smash blue invaders for him. If they fail, Megaman better get ready to a bash of Citrus Bombs. Weapon: Citrus Bomb 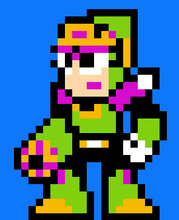 Loot Woman is the queen of all glimmer, shine, gems and gold. She hides in a mine and wrecks havoc by taking every valuable thing she finds. Her crown is her main power source. Weapon: Glimmering Glass 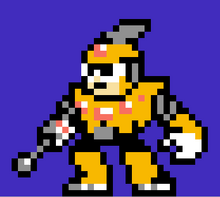 Coil Man's stretchable arms can shock in powers of up to 10,000,000 volts. His cannon sends out powerful coil jolts called the Thunder Coils. Weapon: Thunder Coil 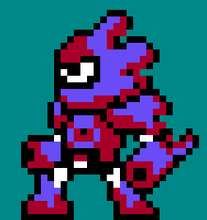 Infra Man is designed with a keen sense of sight, because he can see also in Infra-Red and Ultra-Violet and is the first robot to see outside the human spectrum. Weapon: Infra Dash 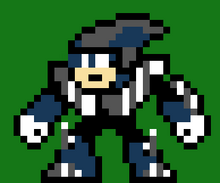 Vortex Man is an extremely agile robot which can travel through time, rip through the matter of our universe, and, using upgraded leftovers from Sheep Man, he can travel into different dimentions. Weapon: Ruin Vortex 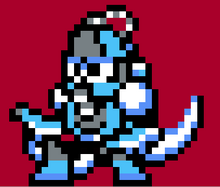 If somebody were to cut Flood Man's pipe, Flood Man will go crazy and start flooding the area. You shouldn't slash him with Pike Slash because he'll flood the area with toxic water that will slowly take health from you (1 health bar per 5 seconds). Weapon: Bouncing Bubble
Add a photo to this gallery