I concept, sprite and show the results.

Coil Man. Designed to work near powerplants, his stretchable Coil Arms power electricity in levels of up to 1,000,000 volts. Weapon: Thunder Coil 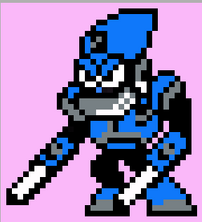 Tar Man was made to purificy the oceans and store all polluted water in his belly. He has so much contamination in his stomach, it's unreal even for a purification robot. After the reprogram, Tar Man got two Tar Bubble guns and the power to overheat the tar. The oil, tar and petroleum stored inside him has turned him to a nucleus of brutal power. Weapon: Tar Bubble 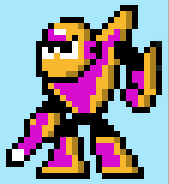 Geode Man was a beta Stone Man design that got rejected due to his small body. Dissapointed, Geode Man drilled the Earth to show Wily he's worthy. After accidentally drilling through a spreading crystal, Geode Man's inner body became full of pink Geodes. Wily now uses him to terrorize the buildings by crystallizing them. Weapon: Geode Spread 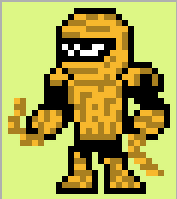 Tether Man is an ancient robot ropemaster capable of building almost anything from ropes. Stretching from spikes, to bazookas, and ending in life forms, nobody knows what this robot is capable of. *Concept credit goes to Mullsha* 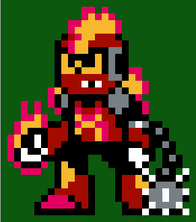 Dungeon Man lives 40,000 feet down the Earth. He doesn't know what the word "good" means but the best thing he feels is the passion to hurt others. His mace swing can break you to tiny pieces! Weapon: Dungeon Mace 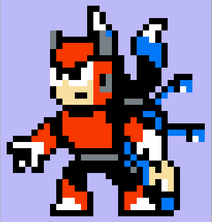 The Polarity Team were actually designed as two different robots meant to work together, but due to an error in the wirings they came out conjoined, with one of them flipped upside down. What meant to be "Opposite Men" ended up being "Polarity Team". They occasionally change sides and utillize both the blue man's laser guns, and the red mans strength. During their flip, they create their main weapon, a powerful energy blast called the Polarity Flip. Weapon: Polarity Flip (An extremely upgraded top spin) 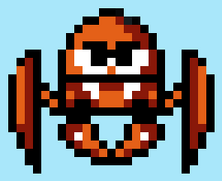 Inferno Brachyer, a small enemy crab moving from side to side in a set pattern. When shot it gets mad and chases the player, but it's limited to the ground. Shoot him twice overall to defeat him. 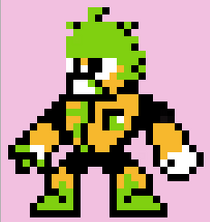 Moss Man is a jungle exploration robot. Due to his circuits being rotten, he is rusty and is not the sharpest robot. But his jungle programming has made him extremely agile, with the abillities to slide on mossy floors (That slow Megaman's movement), jump high and throw moss from his green hand. Weapon: Moss Blast.

Rift Man is a space exploration robot and currently the only thing in the universe that survived a wormhole. Expirements have been made to upgade the armor of Rift Man to make him invurneable to the effects of black holes, but with today's technologies, it seems impossible. He can create a rift that will suck megaman into it, damage him and install the life points taken to Rift Man. Weapon: Warp Rift. This sprite shows Rift Man with his Solar Man-esque rift above it's head. 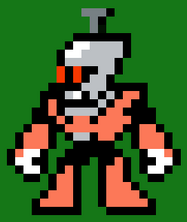 Rift Man is a space exploration robot and currently the only thing in the universe that survived a wormhole. Expirements have been made to upgade the armor of Rift Man to make him invurneable to the effects of black holes, but with today's technologies, it seems impossible. He can create a rift that will suck megaman into it, damage him and install the life points taken to Rift Man. Weapon: Warp Rift. This sprite shows Rift Man in it's regular mode.

A GIF of Rift Man creating the rift. 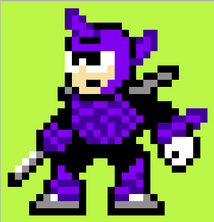 Crochet Man can go a bit on the clean side. He keeps everything in a shiny state and when someone laughs on his design or weapon, they get stabbed. Also, cats love him. Weapon: Fabric Rapier. 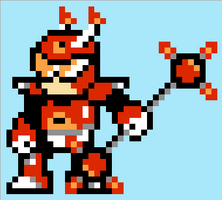 Yeah, yeah, I know Time Tangent was cancelled, but I wanted to do this IgniteMan sprite for fun. :) 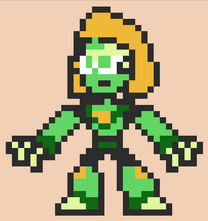 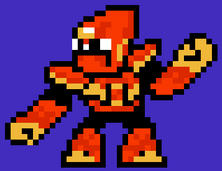 Tungsten Man is an expert blacksmith who can forge out of his stomach the strongest weapons in existence. He's got a melting point, his stomach is his weak spot and if you shoot him correctly in a particular time, he'll suffer from triple damage. Weapon: Molten Burst 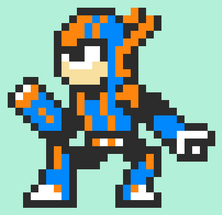 Tesla Man (Originally Nobelium Man) is a tiny robot designed to be hard to keep track of. He can be very chaotic when he pulls out his bolt cannon. Weapon: Tesla Boost 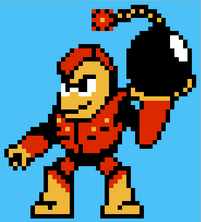 That's probably one of my biggest sprite projects: I did a new (And much bigger) Bomb Man sprite. Enjoy! 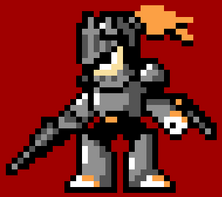 Lance Man is a medieval robot that was built to the annual knight festivals. He won 3 awards and is a manager of the knight fighting shows. He was captured by Dr. Wily, which gave him a shiny armor, even more skill in fighting and a pet cyborg dragon named Strike. Weapon: Lance Boomerang 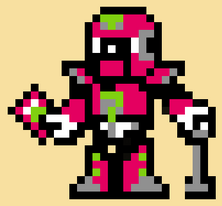 Casino Man is an enertainment robot made by the best of blackjack players and with the assistance of the luckiest person in the world, he was given the abillity to gamble and win every time using his cane. Packed with some style, when Casino Man reached the local card center, the power got to his mind and he destroyed the center. Now he's in wily's control, and he wants to defeat megaman only because wily told him megaman is very lucky. Weapon: Ace Deal 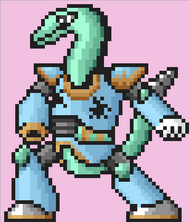 I tried 16 Bit, due to the Variable Zero contest. Took 2 hours to do. This is Dust Dreel, an eel who's job is to find hidden oil. He'd give Zero the Dastupanchi technique. Zero will punch the air and huge swarm of dust piles is released. 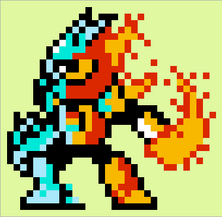 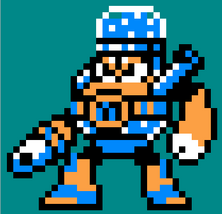 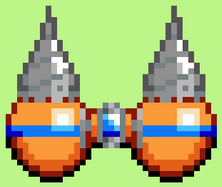 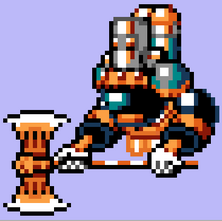 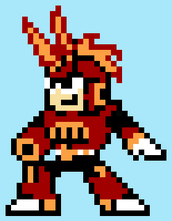 I took a stab at Megaman FD's Inferno Man because I love him so much :P (With Mohawk) 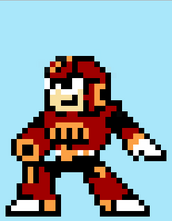 I took a stab at Megaman FD's Inferno Man because I love him so much :P (Without Mohawk)

I wanted to stray away from 8 bit, and thus, 16-bit Trinitro Man was born. 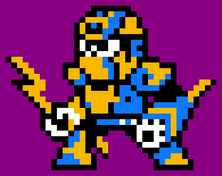 Storm Man was created as a weather warrior. Meaning, he would create the rain, the lightning and the sunlight. While he isn't responsible for them, he just gives them a signal to tell them when to come out, according to weathermen's forecast. Wily modified him to be a real warrior. His Thunder Spear can shock robots and his Rain Filter can flood entire villages. A deadly combo indeed! Weapon: Thunder Attack 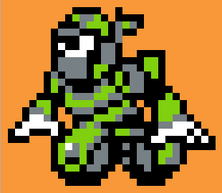 "The green biker" they call him, and he's a new enviroment saver. He cares only about bicycles and recycling. Wily reprogrammed him to do the opposite and destroy the Sumatran forest. Weapon: Natural Boost.
Add a photo to this gallery
Retrieved from "https://megamanfanon.fandom.com/wiki/User_blog:Cheyser_the_Cavelazer_Blast/My_Ultimate_Sprite_Blog!?oldid=16685"
Community content is available under CC-BY-SA unless otherwise noted.
Gaming: New Releases New in Entertainment Lifestyle: Travel